This painting shows the city of Leiden. The townscape is characterized by historic buildings, narrow streets, water canals, small bridges and charming cafes and restaurants. In the Middle Ages, the city was a crossroad for trade. In 1575, the country’s first university was also founded here, where young people from all over Europe studied. Later, during the Golden Age, which reached its peak around 1650, Leiden was the second most important city in the country. This important historical past can still be seen and felt everywhere in the picturesque city of Leiden.

“Get a bicycle. You will not regret it, if you live.”

In early April, I visited the famous cherry blossom streets in Bonn, Germany. The cherry trees were planted in 1980 as a symbol of friendship between Germany and Japan. And now every spring the trees are flowering over Bonn’s streets. I was a bit late because the blossoms were already starting to flutter to the ground. But on the other side, the sidewalks and streets had a beautiful layer of delicate petals.

Inspired by these vivid pink flowers blooming, I made this painting. I also created a time-lapse video of how I painted it. The video is just below the photos.

Today the cherry blossom flowers are a symbol of hope, beauty, and new life. 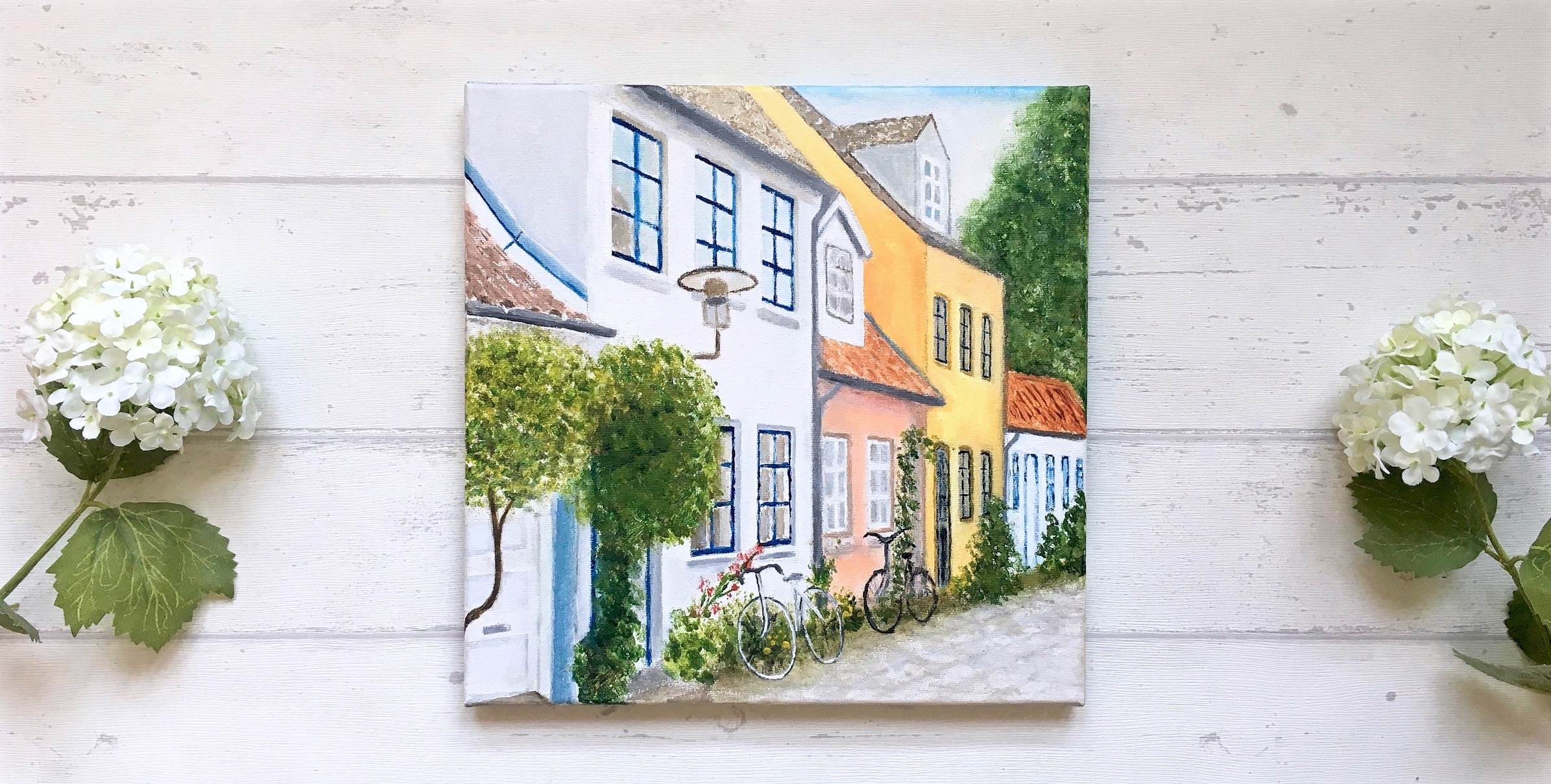 This painting shows a lovely and cozy street in Denmark. I fall in love with the colors of the houses and the greenery in the front. The difficult part of this painting was to sketch the houses and all the windows right. I also made a time-lapse video of how I’m painting it! Right below are some details of the painting and the video. 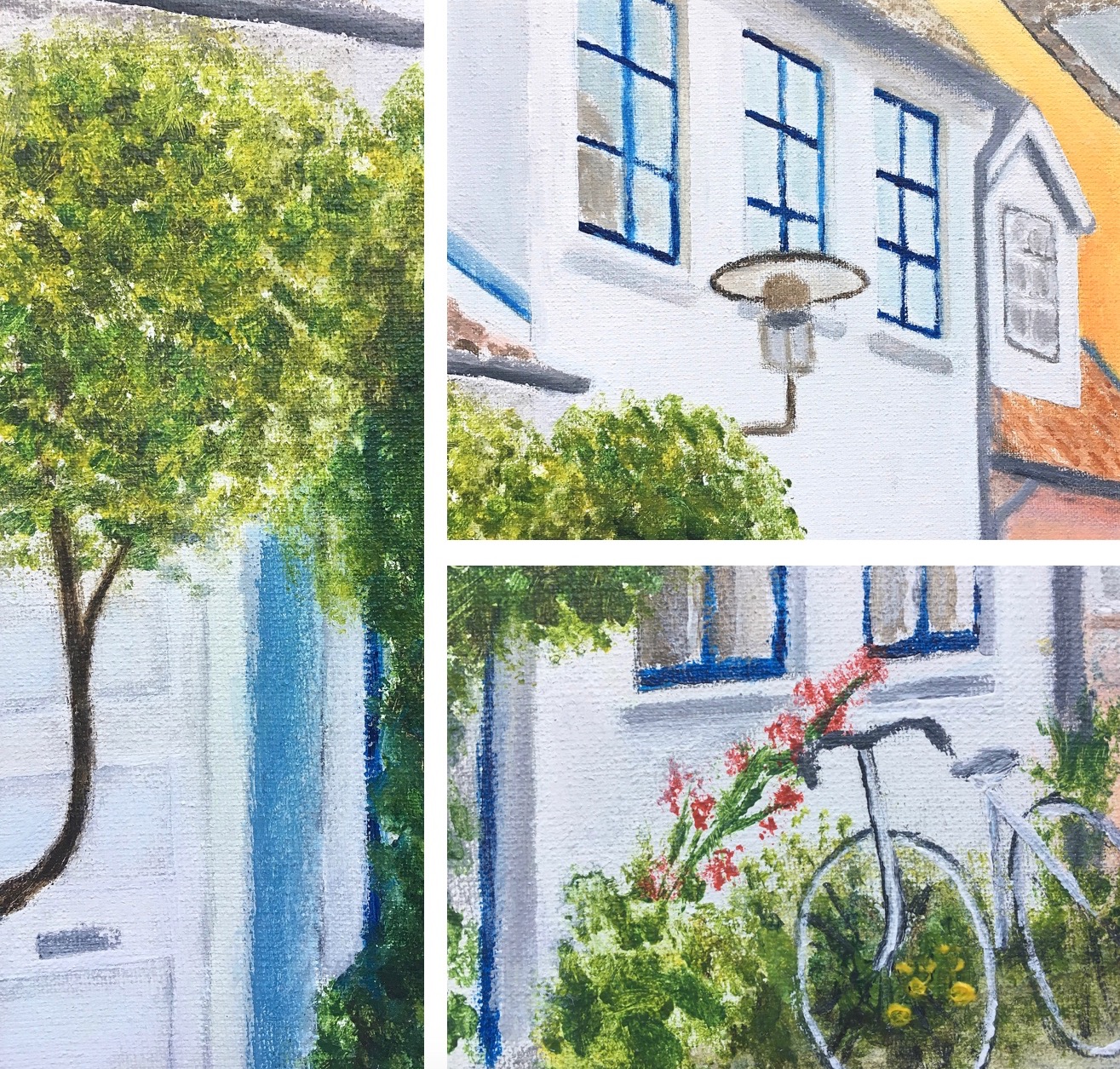 “Keep close to Nature’s heart … and break clear away, once in a while, and climb a mountain or spend a week in the woods. Wash your spirit clean.”

November – frosty mornings and the end of fall. This painting shows a lake surrounded by colorful trees and some firs. And these wonderful wide range of colors is reflected by the lake. The view is framed by an overhanging branch with a lot of leaves in all fall colors.

„Time changes everything except something within us which is always surprised by change.“

As leaves slowly change from green to an array of yellow, orange, and red, this leads to a natural beauty in the world. Being outside in the fall is truly enjoyable. Last year, I saw a beautiful country road photo on Instagram by @reason_to_sing and I knew I would love to paint it one day. And now inspired by this picture, I have created this painting and I really love how it turned out!

“I can smell autumn dancing in the breeze. The sweet chill of pumpkin, and crisp sunburnt leaves.”

Fall is in the air and the leaves begin to change color and falling from the trees. I’m enjoying these last few days of warmth but also very exited for all the fall colors. I really enjoyed to paint the country road and all the trees. Only the sunlight that is shining through the trees was a bit difficult to paint.

“Autumn is a second spring when every leaf is a flower.”

This painting shows the Norfolk Lavender farm. It was founded in 1932 and is one of Britain’s biggest lavender farms. It covers approximately 100 acres of fields, which bloom from the middle of June until the end of August, offering an enchanting and beautiful display of color in the North Norfolk countryside.

The farm has a lavender-oil distillery which has been producing lavender oil since the 1930s. It’s also home to the National Collection of Lavenders, a collection of over 100 varieties of lavender. Imagine the intoxicating scent of all those flowers!

“Nothing is more memorable than a smell. One scent can be unexpected, momentary and fleeting, yet conjure up a childhood summer beside a lake in the mountains.”

Last week was very hot and I enjoyed studying outside in the evenings and at the weekend I found some time to paint again.

My latest painting shows a summer landscape with blossoming poppy fields. Right below, there are some detail photos of this painting.

„Through the dancing poppies stole A breeze, most softly lulling to my soul.“

Blooming cherry blossom trees go hand in hand with the arrival of spring. They symbolize renewal and lasts only for a few weeks. I really enjoy this time of year and during the Easter holidays I found time to paint these beautiful cherry blossom trees in a park. I have been inspired by a botanical garden that I visited a few days ago. I have also made a time-lapse video of how I‘m painting them down and some detail shots.

Flowers enshrine my heart between their petals; that’s why my heartbeats love them so much.

February is almost over and winter is coming to an end. Here is a painting of a beautiful snow covered mountain landscape. I really enjoyed painting this snowy landscape and the frozen lake in the front. It is quite a bit of a different style than the ones I painted before, but I really like how it turned out.

„There‘s just something beautiful about walking in snow that nobody else has walked on.“ 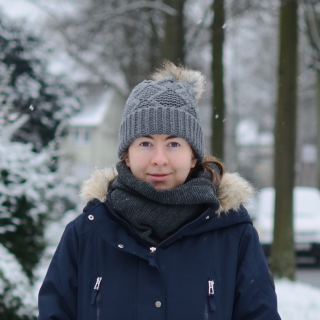 Join 5 other followers
Follow Art by Vera on WordPress.com